Despite multiple claims, the industry’s attitude to the environment remains poor

Pollution from the cruise ship industry is still massive, despite claims newer vessels are clean and green. No company comes recommended in NABU’s 2017 cruise ship rankings, which show just how little progress companies have made towards cutting pollution.

5th september 2017 - Pollution from the cruise ship industry is still massive, despite claims newer vessels are clean and green. No company comes recommended in NABU’s 2017 cruise ship rankings, which show just how little progress companies have made towards cutting pollution. All operators still use heavy fuel oil to power their ships – a dirty and sulphurous tar-like fuel that emits toxic fumes when burnt. Hapag-Lloyd and TUI share the top position due to the installation of nitrogen oxide catalysts, a small but important step towards cleaner ships. Yet sector leaders Costa, MSC and Royal Carribbean offer little to demonstrate they care for the environment or the health of people who live near, work in or holiday on these ships.

NABU CEO Leif Miller: “Despite multiple claims cruise ships are cleaner and greener, the industry’s attitude to the environment remains poor. The lack of action from Costa, MSC and Royal Caribbean to clean up operations endangers their customers, port residents and the global climate. We are also disappointed with greenwash from AIDA Cruises. They have failed to deliver on their promise to invest in particulate filters for the entire fleet.” 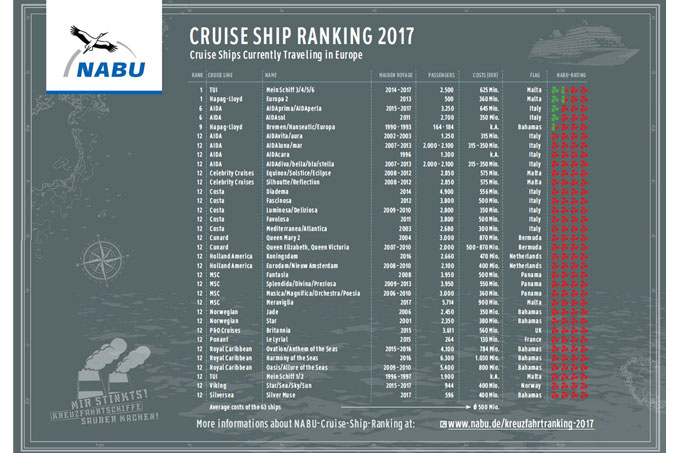 *AIDAprima and AIDAperla are equipped with Soot Particle Filter and SCR-Catalytic System but regarding the company, the exhaust treatment is unfortunately not operational.

The cruise industry’s contempt for the health of its customers and port citizens is underlined by the fact that not one company responded to a simple Q&A supplied by NABU. Instead the CLIA trade association offered a vague and general comment claiming it took this issue seriously. NABU sees this as yet another example of a sector that refuses dialogue and detests transparency.

Dietmar Oeliger, head of transport policy at NABU: “The environmental performance of cruise companies is lousy, as is their attitude to transparency. Last year the sector claimed 23 ships would be operating with soot filters. The truth is not a single filter is working at present.”

Even a mid-size cruise ship burns through as much as 150 tonnes of fuel a day, emitting as much particulate matter as one million cars. Emissions from diesel engines like they are employed on all cruise ships today are qualified carcinogenic by World Health Organisation. They also cause several severe lung or cardiovascular diseases. Recent onboard measurements of pollution on cruise ships illustrated the potential dangers passengers are facing. TV crews in France and Germany recorded levels of particulate pollution up to 200 times higher than normal clean air.
NABU asks for a general ban of heavy fuel oil, a switch to cleaner fuels and regulation that requires the installation of particulate filters and SCR catalysts on all ships.