From an environmental and health point of view none of the european cruise ships is recommendable at the moment. That is the result of the NABU cruise ship ranking 2016.

29th august 2016 – From an environmental and health point of view none of the european cruise ships is recommendable at the moment. That is the result of the NABU cruise ship ranking 2016 that was published this Monday. NABU analysed the european cruise ship market with a special view on the most important environmental problem of the sector, the massive air pollution burden due to ship exhaust emissions. Like in previous years the installation of exhaust gas cleaning systems, the fuel used as well as the use of shore power supply was checked.

The sad result: All ships are still burning heavy fuel oil. 80 per cent of the fleet of ships sailing in Europe do not use any exhaust gas cleaning system or just meet the minimum legal standard, which requires at least a scrubber to reduce the sulphur emissions. To reduce the very harmful air pollutants like soot, ultra-fine particles or nitrogen oxides no effective measures are implemented on board of these ships. Also people living in the mediterranean region with its famous port destinations are not profiting of these retrofittings. Only 11 ships are going beyond the minimum legal standard to reduce the impact on men and environment. The best performer – but only with considerable cutbacks – is AIDAprima, followed by Hapag Lloyds “Europa 2” and the newest ships of TUI Cruises, “Mein Schiff 3, 4 and 5”.

“Since years ship owners boastfully announce that they will be more environmental friendly. But other than shiny PR products nothing substantial is coming into practise so far. That is green washing at its best and in the view of the damage caused not acceptable,” criticises NABU’s CEO Leif Miller.
With only fine words the cause is not served at all – the case is quite the contrary. Especially cynical is that the providers are paying enormous amounts for gastronomical services on board of their luxury liners while economising in environmental protection as much as possible. “This irresponsibility will be paid with human health, especially of residents in port cities.” said Miller. 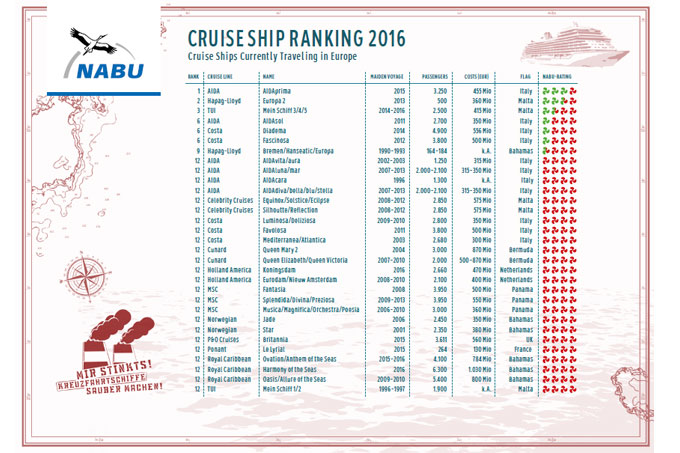 Thus the sector still ignores overwhelming study results, for example by the World Health Organisation WHO, after which ship exhausts are carciogenic and that soot particles which are especialy harming heart and lungs can be blown several hundred meters to inland areas. Thereby technical solutions for reducing emissions of diesel engines like particle filters or nitrogen oxid catalysts are fully developed. Only because of profit reasons the sector refuses so far to switch to cleaner fuels and equip their ships with emission abatement technology.

But also the winner of this years and last years ranking AIDA Cruises is not at all a role model. Thus the company is still sailing – against his committment from 2012 – with toxic and polluting heavy fuel oil. Also the since three years promised soot particle filters are not in operation on any ship. NABU will observe carefully if the next generation AIDA ships actually will run - like announced - on cleaner liquid natural gas.

“AIDA Cruises as market leader and because of its anouncements to be willing to do more for environmental protection is under closer observation. But so far you can hardly talk about consequent environmental protection at the Rostock based company. One example is the AIDAprima the newest fleet entry. The ship was promoted as the most environmental friendly cruise ship. But half a year after its launching the centerpiece of the ship, the exhaust system is not operating,” stated Dietmar Oeliger, NABU Head of Transport policy. A measurement of the exhaust gases by NABU Hamburg has uncovered the fraud. The acid test of the system and its real emission abatement is therefor still due.

The blockade mentality of most of the ship owners regarding environmental protection is also reflected by Germanys most important cruise destination Hamburg. Of the about 40 ships, calling 2016 at the Hamburg port, a handfull is theoretically prepared to get shore power and to switch off the motors while at berth. But so far only AIDAsol is using this possibility.

“The port and its often celebrated cruise ship entries are a massive problem for the city of Hamburg. 38 per cent of the nitrogen oxides and 19 percent of the particulate matter in the Hanseatic city are from maritime traffic according to the recent air quality plan of the city. Even if the companies are saving yealy hundreds of millions of euro taxes through flagging out their ships to low-cost states like Malta, Bahamas or Liberia, the refitting with shore power modules is too expensive for them as well as the costs of the power from the grid. The price are paying the residents of the city of Hamburg and other port cities with substantial health damages” said Malte Siegert, Head of Environmental policy at NABU Hamburg.

Background of the changes of the ranking system this year:
For the first time NABU got the data for its cruise ship ranking aggregated by the cruise companies umbrella organisation CLIA instead of by the individual companies. The association operated obviously with wrong numbers. After CLIA should 23 ships be already equiped with soot particle filters, upon request CLIA could not name one. Especially brazen is presented Royal Carribean with the statement to have in operation soot particle filters on twelve ships with a reduction rate of 95 per cent. Actually not one ship of this company is operating with this technique.

Particular creativity CLIA showed in developing imaginative technologies like “washwater particle filter” where search engines haven’t found any result. From NABUs point of view this should lead one to believe in the particular engagement in environmental protection – but in the end this hides only a usual scrubber to reduce sulphur emissions, like it is legaly required.