Still not enough ships with emission abatement technique on the market

The cruise ships of the leading providers become cleaner, but still there are too few ships with environmental friendly emission abatement technique. This is a result of the current cruise ship ranking presented by NABU.

3th september 2015 - The cruise ships of the leading providers become cleaner, but still there are too few ships with environmental friendly emission abatement technique. This is a result of the current cruise ship ranking presented by NABU in Hamburg today. The ranking examined the planned ship new builds until 2020. It is based on an analysis of recents developments on the European market with a focus on the environmental performance of ships. Decisive were, besides the fuel used, the planned emission abatement technique as well as other emission reducing measures. NABU representatives welcomed at the presentation of the ranking the willingness of some providers such as AIDA and Costa Cruises to get a handle on the massive emission problem of their ships. If the ships enter the market as announced, they will be a worldwide model for high sea ships. The ongoing denial of big market players such as Royal Caribbean und MSC was harshly criticised by the environmental experts.

NABU CEO Leif Miller: „The sector is at crossroads, now the chaff is sifted from the wheat. Companies that still dread to invest in emission abatement techniques and better fuels today act completely negligently. It is unbelvieble that a big part of the cruise industry makes good money at the expanse of environment, climate and human health but ducks away when it comes to taking over responsibility.“ Just a couple of weeks ago a study from the Helmholtz-insitute proved again the massive impairments that ship emissions mean for human health. However, the cruise ship companies at the top of the ranking prove that technical solutions to drastically lower emissions from ships are available. Now the aim is that all new ships use these techniques comprehensively.

A look at the ranking shows that AIDA could assert its position at the top. Last year the ships „Prima“ and „Mia“ were already the best new builds. But AIDA just recently announced that two, so far not named, new build ships will run completely without heavy fuel oil (HFO) but on liquefied natural gas (LNG) that can be burnt without emitting poisonous air pollutants such as Particulate Matter (PM), soot (BC) and sulphur dioxides (SO2). Only the ships of AIDAs Italian mother company Costa can keep pace because Costa ordered the same type of ships. That’s why the top position of the ranking is shared by Costa and AIDA. 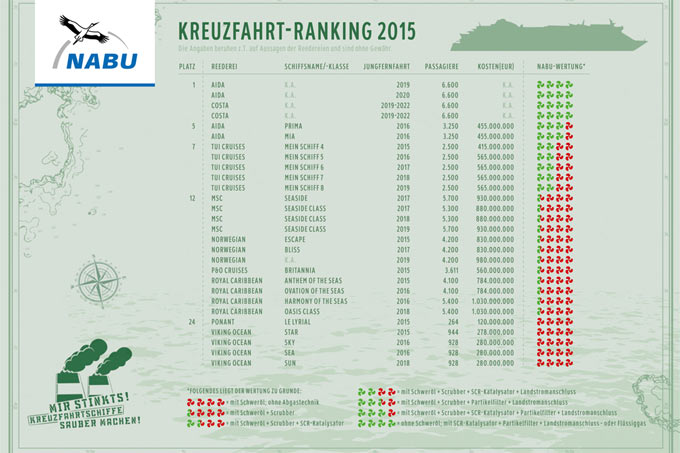 Besides this all other cruise companies hang on to the operation with HFO and invest in emission abatement techniques only if forced by the law. Thus almost all ship owners invested in so called “scrubbers” that wash the exhaust gases in order to keep thei ships running on HFO after the stricter sulphur limits in the North- and Baltic sea came into force. This has nothing to do with a selfless engagement to protect the environment or the climate, as press statements like to claim. In NABUs view, shipping in general needs to stop using HFO at all which not only pollutes the air massively but also can cause huge environmental disasters in the case of averages.

Especially the taillights of the ranking such as MSC Cruises, Royal Caribbean, Viking Ocean or Norwegian Cruises see obviously no reason to equip their new build ships with emission abatement techniques or to switch to low sulphur fuels. What is more the current growth in the sector and the related increase of ship calls leads to massive air pollution problems in port cities such as Hamburg.

Malte Siegert, Head of Environmental Policy at NABU Hamburg: “The city of Hamburg decided, in order to somewhat handle the increasing air pollution from cruise ships especially near residential areas, to equip the cruise terminal in Altona with an onshore power supply (OPS) that cost several million Euros and to finance the infrastructure on land for an LNG barge at the cruise terminal Hafencity. Besides the question if these investments really should be paid by taxpayer’s money, the ship owners now need to make use of the energy provided so the ships engines can be shut down during berthing time. An OPS of course only makes sense if the energy comes from renewable sources. Still ships need to be equipped with SCR catalysts and diesel particulate filters in order to reduce diesel soot and PM the same way it is a standard for cars and trucks since many years. That is still needed because once the plug is pulled from the OPS a ship continues to emit health impairing emissions in the port and on the river Elbe.” 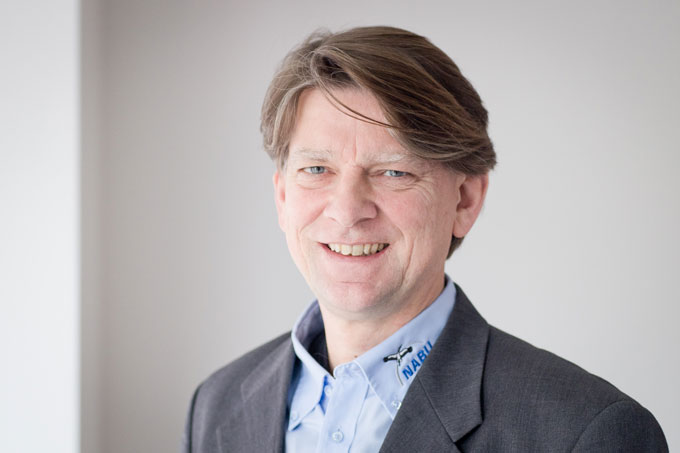