The ecology of the Baltic Sea is in bad shape, as typical habitats are under threat or have already completely disappeared. According to the current plans, Nord Stream 2 will pass through five protected areas, despite there being no urgent need for an increased gas supply. 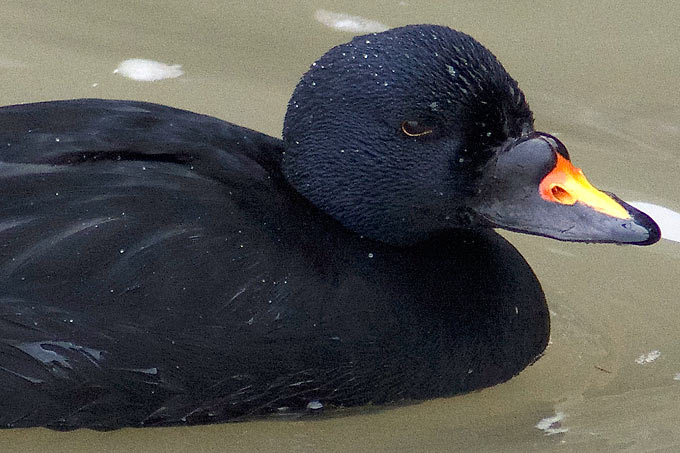 The Bay of Pomerania is an important wintering area for the Common Scoter - Photo: René Bürgisser/www.naturgucker.de

The Nord Stream Pipeline 2 (NSP2) is to permit the transportation of gas from Ust-Luga in Russia to Germany for at least the next 50 years. However the pipeline is not needed to supply Germany with gas. The existing Pipeline Nord Stream 1 is not being used to full capacity, and the existing gas import and storage capacity already exceeds German gas consumption by three times. Therefore secure gas supplies to Germany are more than adequately ensured.

Why Nord Stream 2 is damaging for the natural world, climate and politics

At around 1200 kilometres in length, the Gazprom pipeline will be transporting 55 billion cubic metres of gas annually to the German state of Mecklenburg-Vorpommern. In German coastal waters the sea floor will be dug up over an area of up to 80 metres in width in some parts. Protected habitats will be destroyed and endangered common porpoises and sea ducks will be driven away. In the Bay of Greifswald (Greifswalder Bodden) alone, 254 tons of bioavailable phosphorus will be released, adding yet more nutrients to an already nutrient-polluted Baltic Sea. The consequence will be strong algal growth. When the algae die off, the result will be ever larger areas of oxygen-deficient dead zones.  It is the height of absurdity that all this should happen in protected areas.

From the point of view of climate policy, Nord Stream 2 is a dead end. Under the pretext of being a "bridging technology", we will be committed to another fifty years of burning fossil fuels. Because of the release of methane in the extraction and transportation of natural gas, it is no better than coal or oil in terms of its effects on the climate. Methane is up to eight-seven times more harmful to the climate than carbon dioxide. Nord Stream 2 is not needed to secure Germany's gas supplies, as consumption has been steadily dropping for many years. At the same time Germany's gas imports and storage capacity are today three times as great  as consumption and even the already existing Nord Stream Pipeline is not being used to full-capacity.

Over sixty meetings between the federal government and representatives of Nord Stream 2 or their financiers have taken place since January 2015 according to information provided by the government. The strategy seems to be working: neither the withholding of environmental data nor a lack of participation by the public seems to be holding the project up. At the same time, Germany is isolating itself from its European neighbours. Poland, and the Baltic and Scandinavian countries as well as the European Commission are against the Project Nord Stream 2.

Who is behind Nord Stream 2?

In the final analysis the pipeline belongs to Gazprom, but it is being financed to the tune of just under a billion Euros each by five energy companies who also want to profit from Russian gas. Those involved are Uniper, and the BASF subsidiary company Winterhall, from Germany, OMV from Austria, Shell from the Netherlands and Engie from France. 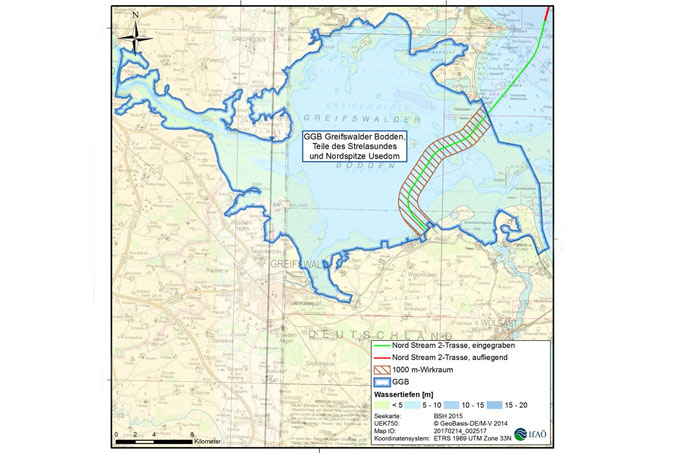 From the point of view of NABU, the state of current demand leads to only one conclusion, namely the rejection of its construction.
From NABU’s perspective, it is above all the disturbance to five Natura 2000 sites in coastal areas and the Exclusive Economic Zone (EEZ) in Germany which poses a threat to the environment.

About 100 000 pipes encased in concrete are to be laid per line section, an enormous amount of manmade material that does not belong in the sea. Furthermore, there has been an inadequate examination of the cumulative effects on the environment. Hence these circumstances lead NABU to conclude that an intervention in sensitive and often already heavily damaged ecosystems is not justifiable. With 1.25 million seabirds seeking shelter here each year, the Bay of Pomerania is one of the ten most important wintering areas in the Baltic Sea. The precise extent and boundaries of the Special Protection Areas (SPAs) were based on the presence of species of annex I of the Birds Directive: divers, red-necked grebes, long-tailed duck and velvet scoter.

In winter and spring black scoters also occur in high concentrations and furthermore use the area in summer to moult. Currently the overall construction schedule ignores the needs of individual bird species. NABU demands that the needs of the different species be adequately taken into consideration and disturbances caused by the construction assessed transparently. Failure to do so would defeat the very purpose of protected areas: a safe haven for species.

The Bay of Pomerania is the habitat of the only native and particularly noise-sensitive species of whale, the harbour porpoise - Photo: Willi Rolfes

An important issue for environmental and nature conservation organizations is to examine the data upon which applicants base their environmental impact assessment. In the case of NSP2, monitoring data is not sufficiently accessible or is only available in an already interpreted form. Raw data for independent evaluation is missing, which, from NABU’s perspective, is obviously an unsatisfactory state of affairs.

Furthermore, there is a lack of studies on the possible hazards to the gas pipeline caused by navy exercises in the military training area of the Bay of Pomerania as well as information on how to proceed with the expected detonations and recovery of munitions from the past along the route of the pipeline (worst-case-scenario). The Bay of Pomerania is the habitat of the only native and particularly noise-sensitive species of whale: the harbour porpoise.

Proper compensation for environmental damage is not viable

It is legally binding that, for interventions in the natural environment, there has to be compensation or mitigation through nature conservation measures to make up for unavoidable damage. The proposed plan for compensation measures within the twelve mile zone is poorly conceived and not foolproof. Many land owners do not agree with the change in use, or feel that their rights have been curtailed. As a consequence they often do not want to provide even one hectare of their land voluntarily, clearly not a good starting point for a successful compensation. NABU is opposed to compensation by means of financial settlement for the disturbance of the marine environment (as the applicants are planning within the EEZ) and is demanding complete, real and actual habitat compensation and mitigation if the plan is approved. Experience shows that compensation funds do not help the damaged habitats and species.

A project with permanent long-term effects which no one needs

Nord Stream 2 would be the biggest man-made construction within the Baltic Sea, and one that would probably stay permanently on the sea floor, even when it is no longer in use, as financial provision is not being made for its eventual dismantling. Furthermore NABU is afraid that the approval of NSP2 will make similar projects easier to approve in the future.

After putting forward all its arguments concerning conservation and environmental aspects, NABU expects and demands a stop to the construction of the Nord Stream Pipeline 2, which is such a risky venture from the point of view of energy usage and protection of the natural world. 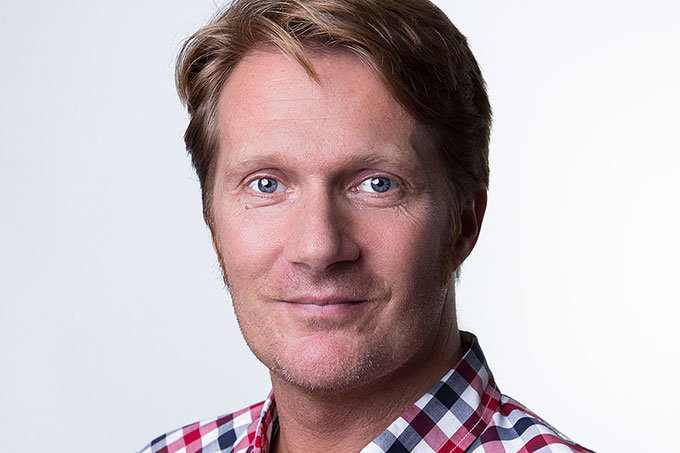 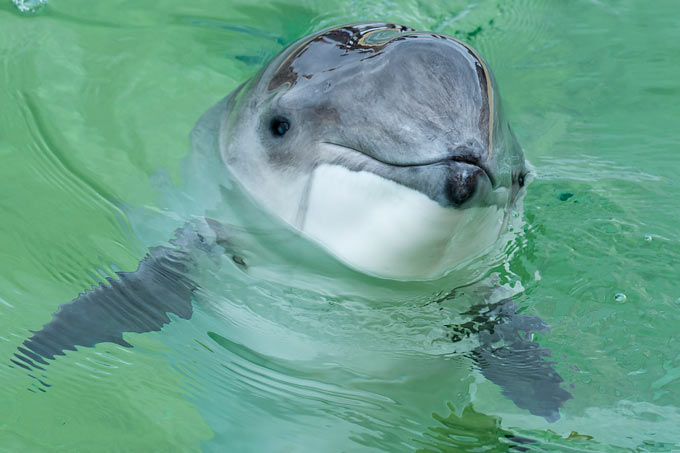