The Yak is one of five domesticated bovine species and occurs widely in Central Asia. The breed is differentiated in the Wild Yak, which can be found on the list for endangered species, and the domestic yak held by Central Asian people.

Weight: 200 - 700kg. Female ones weight less due to their smaller size

Colour: Brown and black, but also red, white and spotted

Nourishment: Mainly grass, herbs, moss and lichens; but also spiky and woody plants. It can survive several days without any food or water and loses up to 20% of its weight in winter time

Yaks can defend themselves against attacks. - Photo: NABU

The primal cattle breed is very undemanding and perfect adapted to the extreme climate conditions in the Central Asian Highlands. They live outdoors all year and up to 4.500 meters, they are extremely resistant against coldness and frost and find purchase on mountain slopes with 75% hill.

Yaks own a well-marked social behaviour and graze near together. The herd contains only of female and young animals until the bulls turn up during the mating season. In case of an attack the herd defends as a closed community and hence rarely falls victim to predators.

The domesticated Yak is not just an important source of food, but also the only provider of milk, leather and wool in faraway alpine regions, as well as an important pack ad riding animal which can transport up to 100 kg. With its wide and robust claws it is particularly sure of step and especially on snowy mountain passes a valuable attendant. Besides local goods they often transport climbing equipment for foreign extreme mountain climbers to base camps. The Yak and its by-products are mostly entirely utilized; hence the dung used as combustible material. In ancient times, so wrote the poet Martial (41-100 A.D.), aristocratic Roman madams used Yak tails with their bushy tassel as fly whisk. 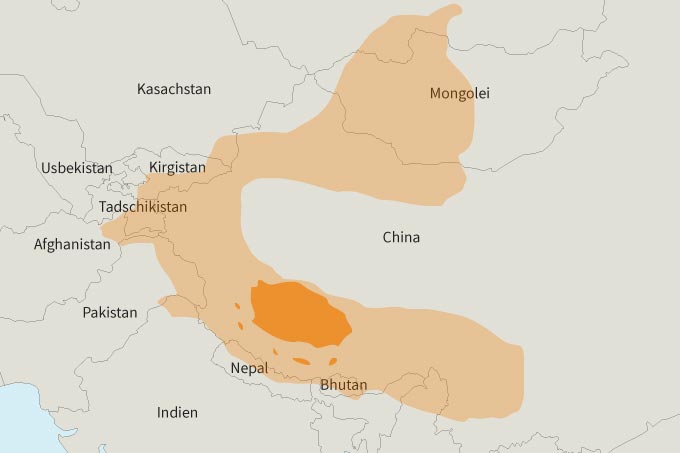 Fossil findings in Mongolia proof an age of the species of 100.000 years, but the primal Yak probably existed 2 million years ago. It spread from the Himalaya and the Tibetan Highlands towards North and South Asia, several animals were brought to Mongolia, the Caucasus and Russia between the 13th and 18th century. The nation of the Qiang in Tibet is said to be the first one to domesticate wild Yaks 10.000 years ago. The number of domesticated Yaks in Central Asia is estimated to be around 14 million today, 90% live in China and Mongolia.