Lake Tana, one of Africa's most unique wetland ecosystems and the source of 50 % of Ethiopia's freshwater is located in the north-western part of the Ethiopian Highlands.

Lake Tana, one of Africa's most unique wetland ecosystems and the source of 50% of Ethiopia's freshwater is located in the north-western part of the Ethiopian Highlands. 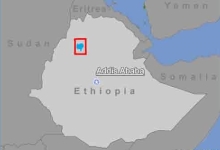 Lake Tana and its surrounding areas are situated in the Amhara National Regional State in the north west of Ethiopia. The Regional State's capital city Bahir-Dar is located on the southern shores of the lake.

Approximately 84 kilometres in length and 66 kilometres wide, Lake Tana is Ethiopia's largest lake and, at an elevation of 1840 meters above sea level, it is also the highest lake in Africa. It was formed by volcanic activity around 5 million years ago.

Around 40 rivers and streams flow into the lake from its large surrounding watershed area of around 15,000 km2. It is the source of the Blue Nile River, which, after joining with the White Nile in Khartoum , flows through Sudan and Egypt before emerging into the Mediterranean Sea. 85% of the water in the River Nile originates in Ethiopia and the Lake Tana watershed, meaning the area is of significant international importance in ensuring the water supply to all of the countries downstream.