Unique habitats on the shores of Lake Tana

The Lake Tana region has a high level of biological diversity and is considered part of two biodiversity hotspots: the Eastern Afromontane Hotspot and Horn of Africa Hotspot. Its invaluable ecosystems and habitats are of local and international significance. 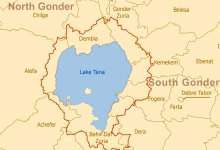 Abundant wetlands, swamps, marshes and floodplains are found all around the shores of Lake Tana and its tributaries. Together these form the largest wetland complex in Ethiopia and are of global importance. These are rich natural ecosystems and support many endemic animal and plants species.

The lake is internationally recognised as an Important Bird Area (IBA). Its wetlands provide a habitat for many endemic and migratory bird species which depend on the area for feeding, nesting and roosting. Due to its location at the horn of Africa, the lake is an important stopover and wintering site for many migratory birds on the flyway between Europe, Asia and Africa. The marshes and shallow areas of the lake are some of the most important wintering areas for Central and Northern European migratory bird species including the Northern Pintail, Northern Shoveller and the Black-tailed Godwit. Rare bird species such as the endemic Wattled Crane and Black-crowned Crane also use the wetlands surrounding the lake. Vast undisturbed reedbeds serve as breeding, feeding and roosting sites for these resident crane species and are essential for their survival.

Lake Tana is well known for its unique concentration of endemic fish species due to the lake's isolation from other water bodies separated by the Tis Issat falls. Approximately 70% of the 67 different fish species recorded in Lake Tana are endemic and the lake is home to the only remaining intact flock of Barbus fish in the world. Hippopotamuses, and reptiles like the Nile Crocodile and Nile Monitor also populate the lake and its surrounding areas. Papyrus, one of the characteristic features of Lake Tana, grows along the lake's shoreline.

There are a few patches of original forest vegetation that have been protected by churches and monasteries in the area. These remnant church forests are islands of biodiversity, providing refuge for well over 100 tree and plant species, many of them indigenous and rare. These sites are invaluable pools of genetic resources for example of wild coffee and field crop varieties.