In Azerbaijan, at the crossroads where Europe and Asia meet, NABU’s work focuses on the development of a local environmental organisation and the conservation of valuable natural habitats and bird species. At NABU we have over ten years of experience in this field of work. 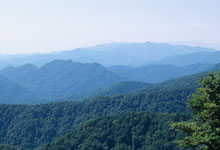 In Azerbaijan, at the crossroads where Europe and Asia meet, NABU’s work focuses on the development of a local environmental organisation and the conservation of valuable natural habitats and bird species.

Nature conservation through strengthening local partner organisations
Conserving biodiversity is a challenge that demands commitment from both government institutions and society as a whole. Not everyone is aware of the consequences of using natural resources unsustainably, but the effects of environmental destruction affect many people both directly and indirectly. That’s why it is essential to raise public awareness and to show local communities good alternatives to using their natural resources. Structures also need to be in place to involve the communities concerned and to ensure that their voice and opinions are heard. 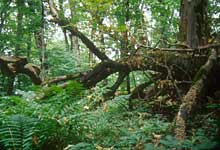 At NABU we have over ten years of experience in this field of work and share the knowledge we have gained with partner organisations in other countries within the scope of our umbrella organisation, BirdLife International (www.birdlife.org). In Azerbaijan we are supporting the strengthening of the Azerbaijan Ornithological Society (AOS) (www.aos.az), a local non-governmental organisation. We are supporting AOS institutionally and offering them advice to help on their way to becoming a membership-based nature conservation organisation and strong partner in the global BirdLife network.

NABU’s activities have already brought about positive results: AOS has expanded from just a handful of ornithologists to over 300 members across the country and has become a focal point for nature conservation in Azerbaijan. In spring 2008 a further success was achieved when AOS was awarded the status of BirdLife Partner Designate. 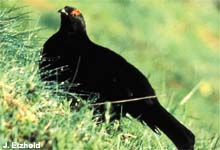 Protection of endangered bird species and their habitats
Azerbaijan is very important in terms of global bird protection. Over 390 bird species have already been found in the country even though it is relatively small; in comparison, Germany, which is significantly larger, only has a few more than 300 species.

This remarkable species diversity is thanks to the wide variety of different ecosystems in Azerbaijan. They provide the perfect habitat for millions of breeding and migratory birds and for some it is the last place in which they can seek refuge. The coastal waters and inland lowland wetlands are important overwintering and stop-over places for hundreds of thousands of migrating birds from Siberia and northern Central Asia, including endangered species such as the white-headed duck, the ferruginous duck, the lesser white-fronted goose and the Dalmatian pelican. The sweeping flat wetlands are the breeding ground for important populations of rare species such as the pygmy cormorant and the marbled duck. The mountains provide a habitat for the majestic imperial eagle and the endemic Caucasian black grouse.

Preserving this important refuge area in its entirety is a key priority of AOS, in particular on the establishment of a national network of Important Bird Areas (IBAs). NABU is supporting the local organisation to achieve this aim.
Following the biological inventory, the next step is to make the data available to the public and to policy-makers and to set up an effective monitoring programme. AOS has already laid the foundations to develop a network to link up IBA caretakers from some of the most important areas.

To raise the public’s awareness and acceptance of the importance of bird conservation in Azerbaijan, AOS provides information events, school workshops and excursions. Additionally NABU has been guiding AOS in the establishment of an annual “Bird of the Year” campaign.

Since 2008 the issue of birds and power lines has been included in our work programme. We have also started compiling information about the size of the white stork population so that Azerbaijan’s blank space on the International White Stork Census can be filled. 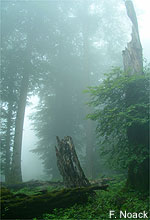 Hyrkan National Park – Preserving unique ancient forests
Some of the last remaining ancient deciduous broadleaf forests in the world are hidden in the Talysh Mountains in the south-east of Azerbaijan. A national park to protect this extraordinary natural habitat was established here a few years ago. NABU has been offering expert advice to the Ministry of Ecology and Natural Resources and to the management of the national park to help with the designation and expansion of the protected area.

Right from the start, NABU has been actively supporting the establishment of the Hyrkan National Park, in particular helping with the initial set up, including establishing the management infrastructure and staff training. With financial support from the Ursula Merz Foundation, rangers were equipped with horses, uniforms and a vehicle. These enable them to carry out their duties such as inspections, maintenance and information services in the area. The construction of a nature trail has been started so visitors to the park can find out more about the wildlife and environment in this valuable area. Gaining acceptance from the local population is very important for the national park that is still quite new in relative terms. Round table discussions and environmental education events have been carried out in the area around the park. Workshops have been held for women’s groups to establish alternative sources of income through the development of sustainable tourism in the region.

These unique forests are our natural heritage. We must protect them on a long-term basis as they are home to an abundance of rare and endemic species, many of which have survived here and remained unchanged since before the Ice Age. NABU is supporting the nomination of this area, including a range of important sites from Iran, to be designated as a UNESCO World Natural Heritage Site so that the Hyrkan Forests will be protected in their entirety.

The country
Azerbaijan is situated in the Caucasus and shares borders with Georgia, Armenia, Iran and the Russian Republic of Dagestan. The Nakhchivan Autonomous Republic, a landlocked exclave of Azerbaijan, has a short six-mile border with Turkey. 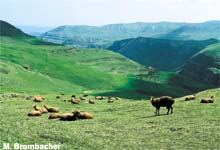 Azerbaijan’s location is determined by the Caspian Sea to the east and by the Greater Caucasus mountain range to the north. Although the country covers a relatively small land area, which is about the size of Austria, it has a wide variety of different landscapes, this is why the area is so rich in species biodiversity.

Impressive mammals, such as the brown bear, the wolf, the Caucasian goat (also called the Tur), graze on the mountains of the Greater Caucasus range. One of the last remaining populations of goitered gazelle in the South Caucasus lives on the lowland steppes of Azerbaijan. The land has its share of some of the most ancient areas of deciduous forest in Eurasia: the Hyrkan Forests. They are one of the last remaining refuges for the highly endangered Persian leopard.


Threats to the Environment
The pressure on Azerbaijan‘s natural heritage has increased dramatically in the last few years. Although the country has experienced rapid economic development, the local population in remote areas have not benefited from the prosperity yet.