Saiga antelopes are part of the steppe, just as bison are part of the prairie. Yet this rare animal only survives in five areas in Asia. NABU is helping to preserve the saiga in Kazakhstan with projects for community-based conservation and environmental education. 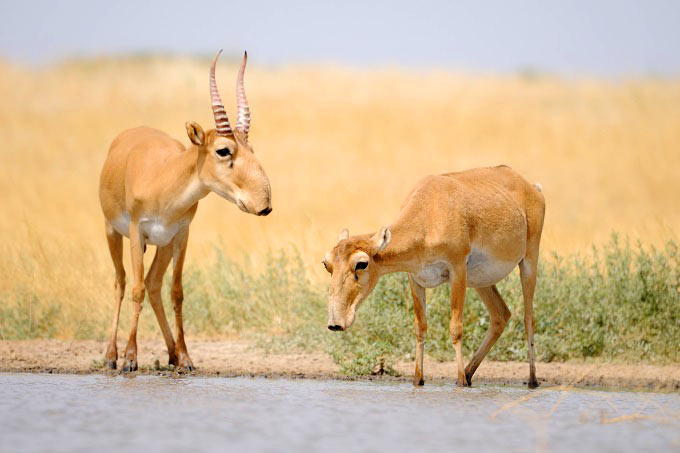 Saiga antelopes were already roaming the earth in the last ice age, along with the mammoths. Their range included Central Europe. Today the temperate steppes and semi-deserts of Central Asia are their home. Around 1990, there were still over a million of them living in the steppes of Kazakhstan. In the years that followed, however, their population collapsed: a massive rise in poaching in the region reduced their numbers to between 30,000 and 40,000 in the steppes of Kazakhstan in the early 2000s. In recent years, various populations have recovered to different degrees. In this article we trace this development and give some insights into the NABU project “Community-Based Conservation of the Saiga Antelope”.

The saiga antelope through the ages

Even after the Ice Age, saigas were still found in Central and Eastern Europe. In the Ukraine they became extinct in the 18th century. Today they only survive in five separate areas: in Mongolia, Russia, Kazakhstan and Uzbekistan. The saiga was already close to extinction at the beginning of the 20th century, but strict conservation measures allowed the populations to recover. At the time of the Soviet Union, saigas were used intensively for meat production and were even deliberately culled in some areas as “agricultural pests”.

In the past, population collapses have also been caused by mass mortality events resulting from extreme weather (e.g. heavy snowfall and ice formation), as well as diseases and probably other factors. Thanks to their high reproduction rates, saiga populations have always been able to largely recover: saigas can become pregnant even in their first year of life. From their second year onwards, the females usually give birth to twins.

After the end of the Soviet Union, the huge saiga herds disappeared within a few years. The steppes and semi-deserts became empty. What had happened? One factor was that poverty had increased rapidly in the post-Soviet countries, including Kazakhstan, leading to a rise in poaching. Poachers killed huge numbers of saiga antelopes, mainly for the horns of the males. The saiga meat was sold on local markets, while the horns went to China. The demand for saiga horns for traditional Chinese medicine (TCM) was – and still is –enormous. The horns are ground into a powder and used as a medicine. The black market price for a kilogram of horn was as high as 350 euros. The male saigas were decimated and no offspring were produced. With a decline of over 90 per cent in just one decade, the saiga antelope became one of the most threatened animal species in the world.

Is this the turning point?

In 2015 the population in central Kazakhstan experienced another mass mortality event, with the death of around 200,000 animals, around 85 per cent of the total number at the time. But thanks to intensive conservation measures on the part of the government, supported by local and international NGOs such as NABU, saiga populations have been able to recover in recent years. According to the current figures calculated by a monitoring team, the number of saigas living in the region now is similar to that before the last mass mortality event. Evidently there were over half a million animals in the largest population, in the Urals, at the beginning of 2021: a fantastic success for nature conservation, but one that also brings new challenges.

Poaching is still a major threat for the saiga antelope - photo: Til Dieterich/NABU, Stefan Michel

Today many farmers fear that saiga antelopes will damage their cereal crops and compete with their domestic animals for food. There are increasingly vocal demands for “population regulation”, i.e. the mass killing of saiga antelopes. The danger is that the public will cease to see the saiga as a strictly protected rarity and begin to see it as a “vermin” that has to be combatted.

Strategies to alleviate these conflicts are urgently needed. These include presenting the farmers and local population with sustainable options for use, thus creating incentives to tolerate the saiga antelopes and ultimately give them long-term protection. This is the foundation for our community-based approach in the Ustyurt region in the south-west of Kazakhstan at the border to Uzbekistan. The herds living in the Ustyurt region are among the smallest and most vulnerable. In 2015 it was estimated that there were, at most, only 1300 animals left.

Herders and poachers are now protecting the saiga

Since 2015, NABU and its experts have worked in the Ustyurt region to protect the saiga antelope from extinction in this region. The government is not able to save the saiga antelope on its own: state wildlife wardens cannot effectively control these vast expanses. So what do we do, specifically? We win over the inhabitants of the most important Ustyurt villages as allies, and advise them on how they can establish recognized wildlife conservation organizations to protect the saiga, and train their own rangers. We immediately equip these wildlife rangers with vehicles, binoculars and GPS devices. We support them on their patrols by building and equipping shelters. The members of the community-based groups bear a considerable portion of the costs themselves, mainly in the form of unpaid work protecting “their” saiga antelopes from poaching.

The locals want to preserve the saiga antelope as an important part of their cultural identity, and hope to derive economic benefits from this in the future. The idea is to collectively develop a strategy, as soon as the populations have recovered, and propose this to the Kazakh nature conservation authorities: a system to ensure that the people who live with the saiga and preserve the animals and their habitat can also profit financially. This could include ecotourism, for example, but also legal, regulated and sustainable hunting of the saiga herds, once they have recovered their strength. 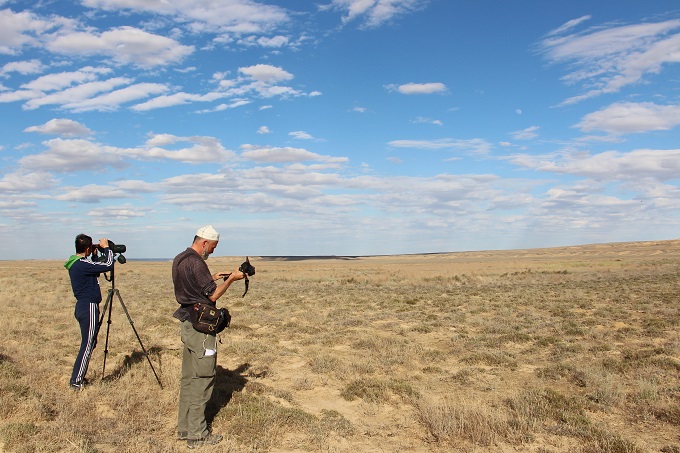 Saiga monitoring is a key component of the conservation strategy - photo: Aibat Muzbay

Based on the results of the aerial survey in spring 2021 the conservation authorities of Kazakhstan estimated the population of saiga in the Ustyurt region with 12,000. An impressive recovery to which local community-based groups have contributed!

This local species conservation work is not only helping one of the oldest mammal species in the world; it is also preserving the ecosystem of the steppe from degradation. The steppe needs the grazing herds: the ungulates fertilize it, spread plant seeds, and keep the grass short. This enables raptors such as the endangered saker falcon to spot their prey, and also provides an ideal habitat for the sandgrouse.

The future of the saiga antelope

Despite local successes in recent years, the saiga is not yet out of danger. Poaching still endangers the small populations in Russia, Mongolia, and the Ustyurt region in Kazakhstan, as well as in Uzbekistan. The Mongolian saiga is also threatened by the transmission of diseases affecting domestic animals, and by habitat destruction as a result of intensive cattle grazing. Railway lines, roads and border fences block the saiga’s migrations. Crop cultivation, mining, and the extraction of oil and gas reduce the size of their habitat. New construction projects currently in planning and further oil and gas fields being developed in the home of the saiga are a growing danger.

The protection of this fascinating species in the future will continue to require close and ambitious collaboration between nature conservationists and locals. Only then will the saiga antelopes in Central Asia have a future.

The project “Community-Based Conservation of the Saiga Antelope and Other Species Through the Development of Village-Level Wildlife Conservation Organizations in Kazakhstan” is funded by the German Federal Ministry for the Environment with funds from the Advisory Assistance Programme (BHP) for environmental conservation in the states of Central and Eastern Europe, the Caucasus and Central Asia, as well as other states bordering the European Union. It is supported by the Federal Agency for Nature Conservation and the German Environment Agency.

The activities under this project are further financed from contributions by NABU’s private sponsors and supporters.

The content of this publication is the responsibility of the authors.

Partners
The project is implemented in cooperation with Centre for the Introduction of New Environmentally-friendly Technologies (CINEST) in Kazakhstan. The local project partner is the Association of Nature Conservation Organizations of Western Kazakhstan “Tabigi Orta” with its member organizations in the project region. The following institutions are partnering the project:
Ministry of Ecology, Geology and Natural Resources of Kazakhstan – Committee for Forestry and Wildlife, Republican State Enterprise “Okhotzooprom”, provincial and district authorities and their departments for nature conservation, provincial environmental police, village administrations

Sponsored by / Supported by
The project “Community-Based Conservation of the Saiga Antelope and Other Species Through the Development of Village-Level Wildlife Conservation Organizations in Kazakhstan” is funded by the German Federal Ministry for the Environment with funds from the Advisory Assistance Programme (BHP) for environmental conservation in the states of Central and Eastern Europe, the Caucasus and Central Asia, as well as other states bordering the European Union. It is supported by the Federal Agency for Nature Conservation and the German Environment Agency.

more from the region 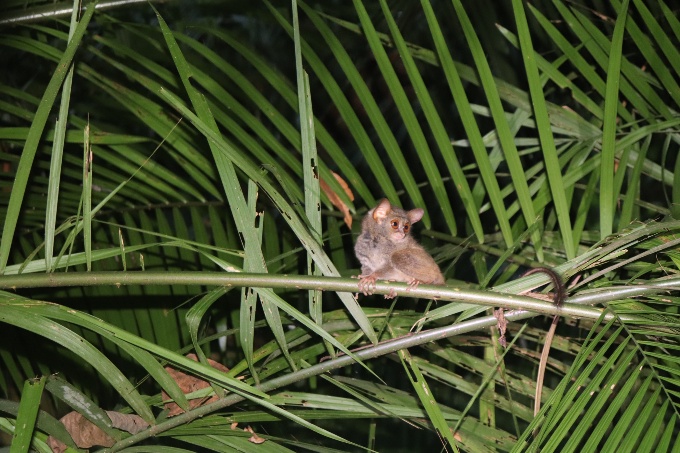 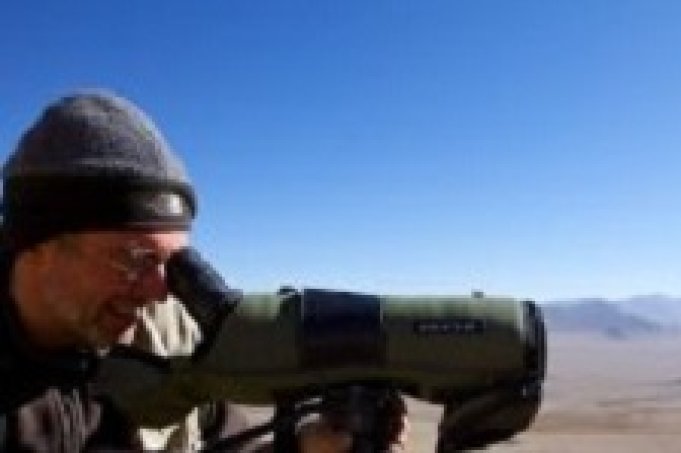 WORKING TOGETHER TO SAVE THE SAIGA

NABU works with Kazakh environmental organizations and closely coordinates its activities with the nature conservation authorities. NABU is a partner of the Memorandum of Understanding Concerning Conservation, Restoration and Sustainable Use of the Saiga Antelope signed by the range states under the Bonn Convention on the Conservation of Migratory Species (CMS). 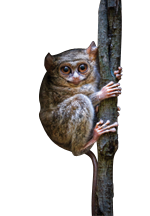