Unique Nature in the North of the Caucasus

NABU has been campaigning on behalf of the local communities and nature of the North-Western Caucasus since the 1990s. We have achieved a series of successes in preserving the biodiversity of the Greater Caucasus Mountain Range thanks to our continuous involvement in the region.

NABU has been campaigning on behalf of the local communities and nature of the North-Western Caucasus since the 1990s. We have achieved a series of successes in preserving the biodiversity of the Greater Caucasus Mountain Range thanks to our continuous involvement in the region. Our work is concentrated on the unique area in the south of the small republic of Adygea that was designated as a UNESCO World Natural Heritage Site in 1999.

Our efforts to conserve this unique area in the North-Western Caucasus are proving particularly successful. This has meant that, through working in cooperation with German universities and the local national park’s management team, the establishment of sustainable tourism in the region was made possible at an early stage. It was also possible to create alternative sources of income for the local population through community participation. Exchanges for young people, students and specialists were organised between the Republic of Adygea and Germany.

In 1999 the foundations for the long-term conservation of the biodiversity of the North-Western Caucasus were laid; with substantial support and backing from NABU, a pristine area of 3,000 square kilometres was designated as a UNESCO World Natural Heritage Site. The designated area is of high environmental significance and is truly unique: a vast area high up in the mountains with a rich biological diversity.
NABU’s work in this area focuses on the following areas:

In order to encourage sustainable regional development in Adygea, in cooperation with the Grüne Liga Berlin and several Adygean non-governmental organisations, we have started a project to develop a nature reserve. NABU is supporting the local population on their path to conserving the region’s valuable natural heritage and to use it sustainably. NABU organised two ecotourism conferences in Adygea to gain acceptance from all of the stakeholders involved about the aims of our work.

The natural heritage of the North-Western Caucasus can only be preserved on a long-term basis if nature conservation is widely accepted by the local community. That’s why NABU, in cooperation with the area’s management team, has built an environmental education centre in the Western Caucasus UNESCO World Natural Heritage Site, so that visitors can find out something new about the area and its wonderful plants and animals in an exhibition at the centre.

NABU has promoted the development and construction of nature trails to supplement the information provided in the centre. These allow people to experience the attractive nature and countryside around them interactively and to gain a deeper understanding. NABU’s work on this project is supported by the Stiftung Ursula Merz, the Stiftung für Bildung und Behindertenförderung (Heidehof Stiftung) and by the German Federal Ministry for the Environment, Nature Conservation and Nuclear Safety (BMU).

The last wild Caucasian bison can be found in their natural habitat in the World Natural Heritage Site in the Western Caucasus. The Caucasian bison was first discovered around 100 years ago as a subspecies of the European bison. However, only 40 years later, the Caucasian bison was almost made extinct. Thanks to a well thought-out breeding programme, it was possible to release a group of bison into the Western Caucasus in 1960. Unfortunately most of this good work was undone in the 1990s in the transition period after the Soviet Union, when the bison population was pushed to its limit through uncontrolled hunting. 80 percent of the 1990 population were killed.

The survival of the Caucasian bison can only be ensured in the long term if more knowledge is gathered through conducting research and monitoring programmes in the protected areas. That is why NABU is working to implement these research programmes in cooperation with scientists and experts from the World Natural Heritage Site and the Russian Academy of Sciences. The programme to protect the Caucasian bison is supported by the Stiftung Ursula Merz. 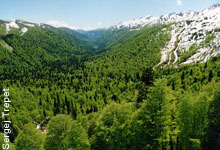 The Caucasian fir forests play a vital role in shaping and protecting the landscape of the mountains in the North Caucasus. They are an important habitat for many plants and animals, many of which are highly endangered or have already been made extinct. The largest part of pristine and undisturbed Caucasian fir forest is to be found in the north-westerly end of the tree’s distribution range, in the Republic of Adygea and in Krasnodar Krai (south Russia). These ancient forests are an important part of the Western Caucasus World Natural Heritage Site.

With the support of the Heidehof Stiftung and the Stiftung Ursula Merz, the groundwork will be established for a long-term monitoring programme and the protection of the Caucasian fir trees both inside the World Natural Heritage Site and in the bordering forests that are used for forestry. The work to manage these forests sustainably is also being initiated and supported. Another integral component of our projects in the area is establishing the important link between nature conservation, forestry and tourism in the project area so that the ecological functions of the forests, their economic potential and the region’s environmental conditions can be preserved.

Alongside the preservation of the biodiversity and linking up different habitats, the project also contributes towards climate adaptation and greenhouse gas fixation. It also offers new employment opportunities for the local population and helps to protect the seed stock for the production of Christmas trees for use abroad. 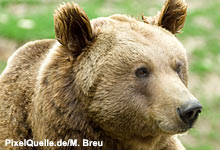 The Autonomous Republic of Aydgea (the name is from the Adygean: “Adyge” which means “nobles”) has been an autonomous republic since 1991 and is located in the southern part of European Russia and in the north-west of the Caucasus. The north of the Republic is part of the southern Russian steppe and is bordered by the Kuban River and the major city of Krasnodar. The unique, unspoilt and majestic summits of the Greater Caucasus Mountain Range can be found in the south of the Republic and are protected in the Western Caucasus UNESCO World Natural Heritage Site. Adygea’s most important rivers are the Belaya and the Laba. Its neighbouring region, Krasnodar, surrounds it.
The most important sources of income in Adygea are food production and agriculture. This is thanks to the fertile black soil in the flat plains in north of the Republic.

The landscape in the southernmost part of the country is shaped by high and low mountain ranges. The mountainous world of the Republic of Adygea has an abundance of natural sights making it a popular destination for tourists. Mountain rivers rush through narrow valleys. Karst caves are hidden in the limestone of the Lago-Naki high plateau. The unique ancient forests and subalpine and alpine meadows are a naturally preserved habitat for large deer, bison, brown bears, wolves and lynx that is unparalleled in Europe and Western Asia.

The “Circassian Gardens” are an important and integral part of the cultural landscape that has now almost disappeared. You can also still see the stones of the 6,000 year-old dolmen grave culture in the valleys of Adygea.

Threats to the Environment 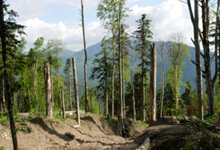 The economic situation in Adygea, in comparison to the neighbouring region of Krasnodar, is still difficult. The population that live on the northern border of the World Natural Heritage Site are one of the poorest in the whole region and are not currently integrated into any development programmes, also in regards to the Olympic Winter Games in 2014. The consequences of this are social poverty, a growing state of economic underdevelopment, declining population numbers and an increased pressure on the area’s natural resources.

The economic and political upheaval has made itself most apparent in remote areas, in particular the mountainous regions that were already disadvantaged. In some settlements, only 10-30 percent of the employable population bring in a regular income, because the forestry and tourism employment infrastructure has been so drastically reduced. The majority of the younger generation have left the area in search of work. Those that stay behind often try to earn an extra income through illegal means such as poaching, illegal logging or unregulated tourism.

On the other hand, in the last few years development in tourism has boomed. The North-Western Caucasus, including the Black Sea coast from Anapa to Sochi, has become one of the most important travel destinations in Russia. This is one of the best economic opportunities for the region, but brings with it problems, in particular for protected areas of nature.

If you have questions about our activities in Adygea or would like to support our work with a donation, please contact: