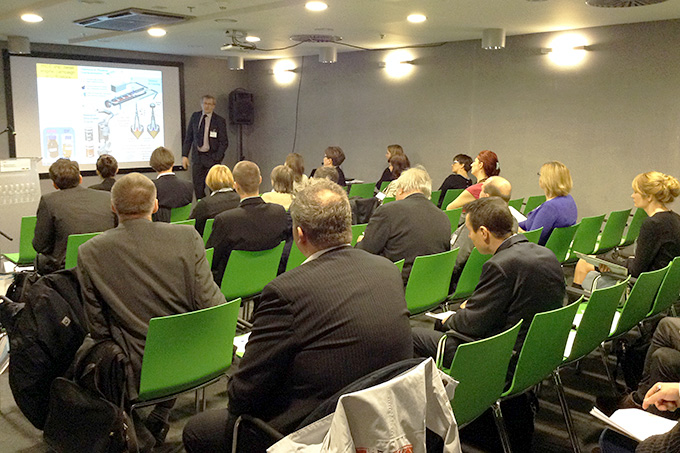 The workshop was opened with a keynote speech from Dagmara Nagórka-Kmiecik from the city of Gdansk, who gave an introduction what is already undertaken to protect the environment and especially to clean the air in Gdansk. Her speech was followed by an introduction into the Clean Air project and NABUs subproject Clean Air in Ports project by Julia Balz. Then Prof. Zimmermann from the HICE project reported recent scientific results about the effect of ship emissions on living lung cells. He pointed out that in order to protect human health it is not sufficient that ships switch to low sulfur fuel, they also need to have particulate filters. Michalina Bielwaska from the Polish ARMAAG foundation then presented their work on air quality in the Gdansk region, where the ports in Gdynia and Gdansk contribute 9,7% resp. 7,3% to the air pollution in their city. The ongoing project of modeling air emissions in the Port of Antwerp was presented by Luc van Espen, A specialty of this project is that the emissions can be attributed to concrete sources. The model is available on the website of the Port of Antwerp.

The second part of the workshop was committed to measures for improving the air quality in a port. The eHighway concept, presented from Hasso Georg Grünjes from Siemens, reduces the air emissions from trucks when they drive electrically on an overhead contact line on certain distances. Measures to reduce air emissions in a port as part of a broad concept were presented by Manfred Lebmeier from the Hamburg Port Authority with the smartPORT concept. Last but not least, the Environmental Ship Index (ESI) from the World Ports Climate Initiative (WPCI) was explained by its director Fer van de Laar.

The presentations of the speaker can be found below.
Even though this has been the last workshop of the “Clean Air in Ports” project, there will be a closing event where the final publication, the manual “Clean Air in Ports” will be presented. This will take place during the workshop “Greening Ports” that will be held at the beginning of the week of the 29 IAPH World Ports Congress on June 1st 2015 in Hamburg.