Ilisu and other controversial dam projects must be stopped

04. Juni 2013 - The embankment dam projects Ilisu in Turkey and Belo Monte in Brasil have devastating consequences for nature and man. But they are also the spearhead of a worldwide dam construction boom that is unprecedented. Within the next years, this supposedly ‘green energy’ may cause even earth’s last remaining nature reserves to collapse. Now, an international alliance called ‘Damocracy’ has formed in order to preserve the last intact rivers. Recently, 25 of its activists blocked the Ilisu construction site, among them Kayapo-Indians from the Amazon, who are committed to stopping the construction of the Belo Monte dam. For the NABU, RiverWatch, the Manfred-Hermsen-Foundation and other non-governmental organisations, Ilisu is a scandalous project bound to trigger an ecological and social catastrophy.

The NABU and the Manfred-Hermsen-Foundation support Damocracy, and for years have supported the RiverWatch campaign ‘Stop Ilisu’ financially and in content. ‘Through networking and by creating international attention, we want to put up resistance against the tightly organised and well-financed dam construction lobby. This can be achieved only by establishing collective international pressure coming from the affected and their supporters’, NABU vice-president Thomas Tennhardt said. ‘Over the last 15 years, hydroelectric power plants have been built in increasing numbers again, and they are misleadingly marketed as “green energy sources”. However, if we bring into focus the consequences suffered by nature and local human populations, the overall social and ecological scenario is devastating’, Tennhardt continued. The first joint Damocracy conference was recently held in Istanbul. Azzam Alwash, president of the NABU partner organisation BirdLife Iraq, also participated. He was recently awarded the Goldman Environmental Prize for his involvement in the preservation of the Mesopotamian Marshes. 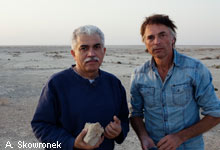 Damocracy demands the immediate abandonment of the Ilisu project and the recognition and preservation of the antique city of Hasankeyf as a UNESCO world cultural and natural heritage site. A scientific survey revealed that the city and the neighbouring Tigris valley are the only region worldwide to meet nine out of the UNESCO’s ten criteria for world cultural and natural heritage sites. However, the Turkish government refuses to preserve the area and intends to flood Hasankeyf. Due to the project, 65,000 inhabitants will have to be relocated, and numerous animal and plant species will face death, among them the Bonelli’s eagle, the Griffon vulture and the already endangered Euphrates softshell turtle.

Damocracy has formed at a time when many of the affected along the Tigris are demoralised. The village of Ilisu has already been relocated, and protests have declined due to military intimidation. According to statements from the construction site management, 70 percent of the dam have already been completed, and its flooding is scheduled for summer 2014. ‘Even if the dam is completed, we want to make sure it is only half flooded, so that Hasankeyf remains above water level’, Ulrich Eichelmann of RiverWatch said on the occasion of the Damocracy-protest. Our campaign shows that we are continuing our resistance. Moreover, our campaign marks the formation of an international movement against the worldwide dam construction craze. If we fail to stop it, there won’t be any intact rivers left in 20 years’, Eichelmann said.

For Climate Crimes, Ulrich Eichelmann spent more than two years across the globe following climate protection campaigns and ‘green energies’. Among other projects, he documented the current situation in Hasankeyf and the construction of the scandalous dam, and visited the Mesopotamian Marshes in Iraq. If the Ilisu dam cannot be stopped, his film may perhaps be the last document of a unique natural heritage site which is currently being destroyed.

The film can be purchased as a DVD online at www.riverwatch.eu.