Nature conservation transcending borders in the high mountains of Pamir-Alai

In the Pamir-Alai region, the border area between Tajikistan and its neighbouring country Kyrgyzstan, NABU is working in cooperation with partner organisations to establish a cross-border protected area. Establishing a protected area is a project that is both ambitious and long-term. 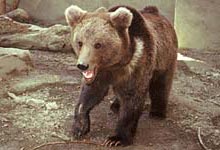 In the Pamir-Alai region, the border area between Tajikistan and its neighbouring country Kyrgyzstan, NABU is working in cooperation with partner organisations to establish a cross-border protected area.

Establishing a protected area, in particular one that is cross-border, is a project that is both ambitious and long-term. The ecosystems, plants and animals found in the planned area have to be investigated and recorded; maps have to be compiled; management plans have to be developed in the long-term and the governments from both countries have to be brought together.

National and international experts systematically compiled information about the plants and animals of the fragile high mountain region and in doing so, also recorded endangered species like the snow leopard, the Himalayan brown bear, the Marco-Polo sheep and many rare bird species – NABU has been working for many years to ensure the survival of species such as these.

All of the information and data gathered are being saved into a publicly accessible database that will form an important foundation in developing a management concept and should make species-monitoring programmes easier in the future. 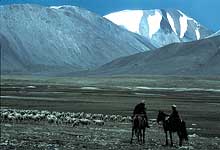 Tajikistan’s climate is subtropical with cold, continental winters and hot summers. The amount of total annual rainfall is low. The country is situated in an area of high seis-mic activity and there is therefore always a constant danger of natural catastrophes.

Tajikistan is traditionally the poorest of the five republics in Central Asia. At least two thirds of the population live under the poverty line. The country's development was set further backwards by the devastating civil war between 1992 and 1997 and its consequences.

Due to the country’s topography, an abundance of different ecosystems has developed that provide a habitat for a wide variety of biodiversity. Around 80 different mammal species, such as the endangered Marco Polo sheep, 360 bird species, 49 fish species, 44 reptile species and more than 5,000 plant species have all been recorded in Tajikistan.

Threats to the Environment
Civil war and increasing poverty have affected nature and the environment in Tajikistan. Many of the conflicts took place inside the country’s protected areas, which meant that the existing nature protection mechanisms that were in place were made ineffective. Due to the lack of funds available to the governmental offices responsible for the environment and nature protection, the door was opened to poaching, illegal logging and corruption. Even today, many of the protected areas in Tajikistan only really exist on paper.

Deforestation and the increasing amount of natural landscape that is being converted to farmland and grazing pastures have also had negative impacts such as land erosion and soil degradation. Due to incorrect irrigation methods, a large proportion of the arable land suffers from salinisation. The surface and ground water has been pol-luted on a large scale by inadequate water treatment and sewerage systems, intensive use of pesticides in agriculture and the salinisation process. The Aral Sea is shrinking due to an increase in water taken from its tributaries for agricultural irriga-tion. Building schemes, such as the construction of the motorway from the capital city Dushanbe to Tschanak, are threatening important ecosystems.

It is estimated that 15 percent of the mammals in Tajikistan are threatened with extinction, although there is no current data from regular monitoring programmes available. Amongst the threatened species are the Marco Polo sheep, the Aral trout (Salmo trutta aralensis), the Markhor (Capra falconeri heptneri) and the snow leopard.