Collaboration for species conservation in the Sahara 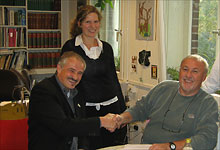 NABU has been supporting the international non-governmental organisation, the Sahara Conservation Fund (SCF) with its work to protect endangered animal species in the Sahara Desert since 2007.

The Sahara Conservation Fund has been working in the Sahara region since 2000, in particular in Tunisia and Niger, and has implemented conservation projects and projects to reintroduce endangered species such as the antelope species Oryx dammah and Addax nasomaculatus. The animals are transported from zoos in the West to Tunisia with the aim of reintroducing them into the wild.

The organisation also works on issues such as the Red List of endangered species, protection of the desert flora and fauna and the usage of sustainable hunting methods.