According to recent estimates, only 250 snow leopards remain alive in Kyrgyzstan. Within a few decades, 50 to 80 percent of the animals have fallen victim to poaching and illegal trading. Among other things, snow leopard skins are processed into coats. A coat alone costs the lives of 16 snow leopards.

For this reason, the NABU established an anti-poaching unit for the conservation of the snow leopard in January 1999 – the "Gruppa Bars". It has already confiscated scores of snow leopard skins and bones and freed three living snow leopards from foothold traps. Dozens of poachers have been arrested and convicted. In the patrol area of the "Gruppa Bars", poaching has declined significantly since then. 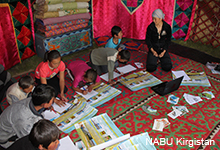 In order to complement this team's highly successful work, the NABU has also been carrying out environmental education programmes throughout the country since autumn 2000. Moreover, the NABU has also initiated the Global Snow Leopard Conservation Forum, which will be held in Bishkek in October 2013 – a milestone for the conservation of the snow leopard in its entire distribution area.